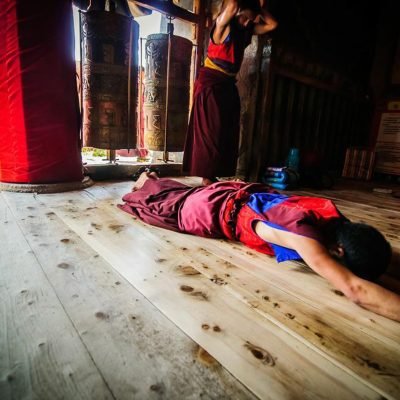 Join us for Tibet’s most festive and celebrated festival, Tibetan New Year!
Don’t miss this once in a lifetime chance to see dances, monks, and unique rituals up close.

Losar (Tibetan: ལོ་གསར་) is the number one most popular festival in Tibetan Buddhism and is also known as Tibetan New Year. The holiday is celebrated on various dates depending on location (Tibet, Bhutan, Nepal, India, Pakistan all have various dates and traditions). The holiday is a new year’s festival, celebrated on the first day of the lunisolar Tibetan calendar, which corresponds to a date in February or March in the Gregorian or western calendar. In 2018, the new year commenced on the 16th of February.

Losar 2021 will begin on February 12.  The first few days of the festival are devoted to visiting family and eating lots of good food, particularly a lot of Yak meat! Then the full religious ceremonies start to open right around February 18!
A variation of the Tibetan New Year festival in Nepal is called Lhochhar and is observed about eight weeks earlier than Tibetan Losar.

Losar, or Tibetan New Year, is celebrated for 15 days, with the main celebrations on the first three days.

Tibetan New Year is a time when family gathers together and then pilgrims travel to monasteries to watch teachings, dances, and ceremonies that convey the teachings of Buddhism.

The Tibetan New Year is a time of eating and drinking unique foods. On the first day of Losar, a beverage called changkol is made from chhaang (a Tibetan cousin of beer). The second day of Losar is known as King’s Losar (gyalpo losar). Losar is traditionally preceded by the five-day practice of Vajrakilaya.

Because the Uyghurs adopted the Chinese calendar, and the Mongols and Tibetans adopted the Uyghur calendar, the Tibetan New Year celebration occurs near or on the same day as the Chinese New Year and the Mongolian New Year, but the traditions of Losar are unique to Tibet, and predate both Indian and Chinese influences. Originally, ancient celebrations of Losar occurred solely on the winter solstice and was only moved to coincide with the Chinese and Mongolian New Year by a leader of the Gelugpa school of Buddhism.

In Tibet, various customs are associated with the holiday:

Families prepare for Losar some days in advance by thoroughly cleaning their homes; decorating with fragrant flowers and painting their walls with auspicious signs painted in flour such as the sun, moon, or a reversed swastika; and preparing cedar, rhododendron, and juniper branches for burning as incense. Debts are settled, quarrels are resolved, new clothes are acquired, and special foods such as kapse (fried twists) are made. A favorite drink is chang (barley beer) which is served warm. Because the words “sheep’s head” and “beginning of the year” sound similar in Tibetan, it is customary to fashion a sheep’s head from colored butter as a decoration. Another traditional decoration that symbolizes a good harvest is the phyemar (“five-grain bucket”), a bucket with a wooden board that creates two vertical halves within. This bucket is filled with zanba (also known as tsamba, roasted qingke barley flour) and barley seeds, then decorated with barley ears and colored butter.

February 18
Arrival in Xining: (2250m) / Drive 45 m.
Arrive in the Xining XNN airport in the mid-moring where you will be met by our local English speaking Tibetan guide and driver who will travel with us throughout our time in Qinghai and Gansu province. Transfer to 4 star hotel. Xining is the biggest city on Tibetan plateau and it is the capital city of Northwest China’s Qinghai province.
In the afternoon, we can take a visit to the Tibetan Medical Museum and the largest Thangka painting in all of Tibet, measuring over 600 meters long. After dinner we will walk to see the New Year lights in Xining. (Overnight in Xining.)

February 19
Xining—Rebkong (Tongren)  (2500m) / Drive 3 hrs.
Drive to Rebkong. Rebkong is home to one of Qinghai's largest Tibetan Buddhist and Bon monasteries. Also it is famous across Tibet for its artists producing some of the highest quality Buddhist paintings in the world. On the way visit Shachung monastery, which is located on a mountain top and has a great view of the valley and the Yellow River. In the afternoon we will visit Sanggeshong Yago (Wutun) monastery and today’s highlight is the Thangka Dispay, a grand ceremony on the slope of a hill that unveils a 30 meter long Buddhist painting to ask for compassion on all living beings. Overnight in Rebkong.

February 20
Rebkong (Tongren) (2500m) / Drive 45 m.
After breakfast, drive to Bongya.  Bongya is one of the ancient Bon Monasteries just outside of Rebkong town.  Here we will get a taste for the shamanistic religion that pre-dated Buddhism in the Tibetan Plateau. We will viisit a colorful Bon religion ceremony. Our program schedule may vary depending on the different ceremonies in the village. Overnight in Rebkong.

In the morning we will drive about 10 km to Gomar Monastery to have a fantastic view of all the villagers gathering to have a breakfast together in the monastery. Some even say that this is the biggest communal breakfast in the world. Local Tibetans bring their milk tea and homemade bread to the monastery and talk about the stories that have happened over the last year and exchange their ambitions and hopes for the coming year. Afterwards, drive to Sanggeshong Yago to enjoy the Cham Dance: The Cham dance calls on traditions that date back more than 500 years. The fourth Panchen Lama went to Shambala (a type of heaven) through meditation and created the Cham Dance.  According to the Cham Dance that the Panchen Lama saw in his ethereal vision, the fifth Dalai Lama formalized the dances in the Cham Yig book, and each monastery has created its own unique interpretations over the centuries. Cham performances and ceremonies feature sacred masked dances, sacred music, healing chants and spectacular richly ornamented multi-colored costumes. The dancers use symbolic hand gestures known as madras to transmit healing powers from the deities. With accompanying narration and a monastic debate demonstration, the program provides a fascinating and vibrant glimpse into ancient and current Tibetan culture. Overnight in Rebkong.

February 22
Rebkong – Ganjia (2896m) / Drive 2 hrs
After breakfast we will visit Rongwu Monastery, the biggest monastery in Rebkong and home to more than 800 monks today. As Rebkong is surrounded by grasslands and mountains, we may also have the possibility to do some hiking in Rebkong. After lunch drive to Ganjia grassland, a lush grassland that sits at 3,200 meters and is home to 1000's of nomads grazing their yaks and sheep on the high, open pastures. Visit Ganjia Monastery and meditation caves and then drive to back of the monastery. In the late afternoon, we will visit a Tibetan family and encounter our first authentic homestay in the Ganjia Grasslands.

February 23
Ganjia – Labrang (2939m) / Drive 1 hr.
Drive to Labrang, visit Labrang monastery which is one of the six great university of Gulegpa yellow hat school of Buddhism. Here we will visit a scripture printing press and walk the small pilgrimage Kora around the monastery as we walk side by side with Tibetan pilgrims prostrating and worshipping at the monastery.  In the afternoon we will walk the long Kora around the monastery to see the pilgrims spinning prayer wheels. In the evening, we can enjoy a philosophical debate by Tibetan monks as they test each other through oral exams on the nature of Buddhism. Overnight in Labrang at a Tibetan decorated boutique hotel.
See our YouTube video on Labrang Monastery here:

After breakfast, walk to Thangka wall. The highlight of the Tibetan New Year Monlam festival is the Sunning the Buddha which is displayed on the slope of a hill just outside the Labrang monastery complex. We will join a large crowd of devout Buddhists who have been waiting since the early morning for today’s special event, the annual Sunning of Buddha ceremony. The huge Thangka will be carried out of the hall towards a mountain range to be spread along the slope of the mountain. Along the way crowds of worshippers will gather around to touch the Thangka in order to get the New Year blessing, and later sing, dance and hold prayer sessions to celebrate the occasion. Afternoon drive to Taktsang Lhamo (Langmusi) and overnight in Langmusi

After breakfast, we will hike through the stunning Lhamo Gorge and visit Taktsang Lhamo monastery as we discover the source of the White Dragon River in a deep cut canyon at 3,200 meters. We will enjoy and participate in the Cham Dance in Taktsang Lhamo monastery.  Then in the afternoon we will drive to Luqu county, visit Luqu monastery and enjoy the colorful Cham dance ceremony there as well. All the participants in dance are  pilgrims who have come from near and far for this special ceremony. You will meet farmers, nomads, pilgrims, and all sorts of Tibetans decked out in their traditional silk robes all there to receive blessings (conferred by touching their heads) from a high ranking Lama. This is a time for the local people to wear all their best clothes and it is a great place to learn about Tibetan fashion and cultural dress. Overnight in Luqu.

February 26
Luqu – Gannan (Hezuo) – Labrang (2939m) / Drive 2-3 hrs.
Drive to Hezou, visit Hezou monastery and Milarepa temple. After lunch drive to Labrang. At night, we will visit an exhibition of elaborately made Yak butter sculptures, which have an almost surreal beauty when lit under the lamps at night. Visitors invariably touch the tender lotus flowers with their foreheads to show their respect toward the Buddha.
Overnight in Labrang at a Tibetan decorated boutique hotel..

After breakfast we will join the local Tibetans in the morning for their ritual ceremony of turning the Maitreya Buddha. The Buddha of Maitreya, or future Buddha, is 3 meters high and is made of silk.  This precious artifact will be carried by a group of monks as they make their way around Labrang monastery. Of course large crowds will follow the whole ceremony again in order to get blessings and Buddhist wishes, hoping that they could follow the Maitreya’s teaching when he or she will turn the Dharma and land back on this earth after the long awaited coming. Afterwards drive to Lanzhou.

Overnight in Lanzhou in a 4 star hotel.

The drive from Lanzhou city to Lanzhou airport is about 1.5 hours.

We will drop you off in one group drop off in the mid-morning as we say our goodbyes with a lifetime full of memories and hearts full of life and hope from our New Year celebration.

Check out and transfer to Lanzhou LHW airport for your departure flight. 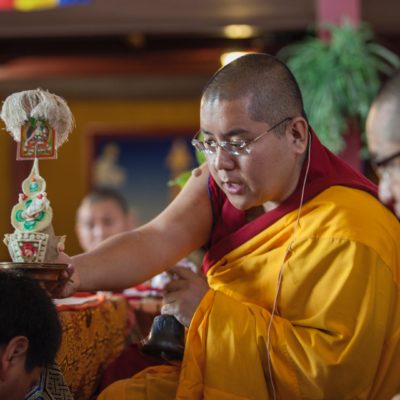 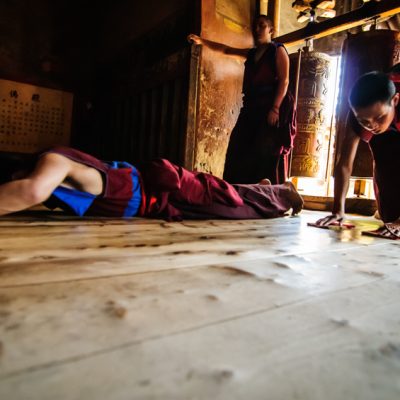 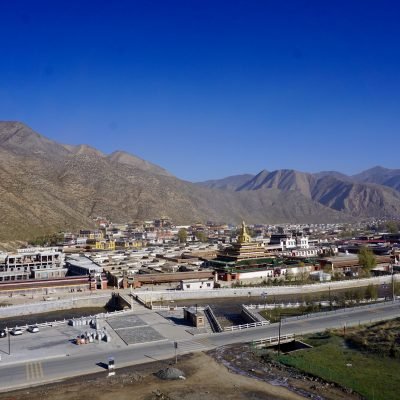 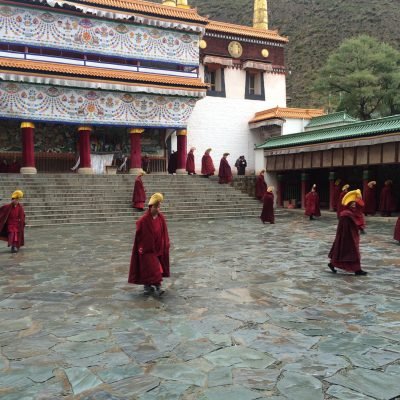 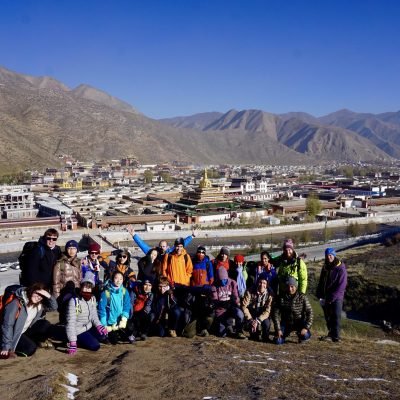 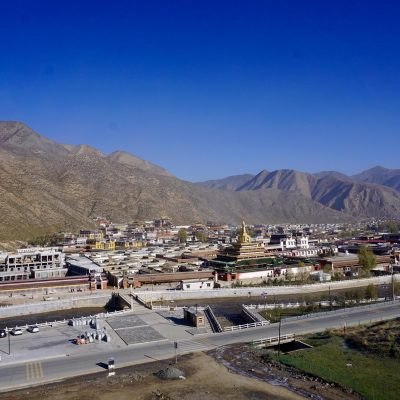 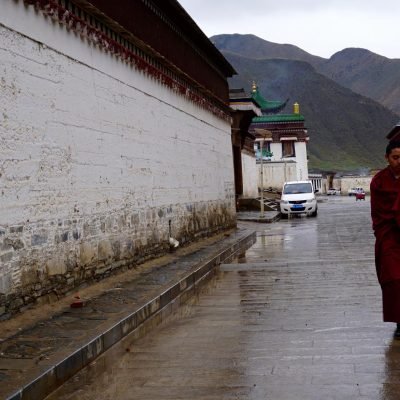 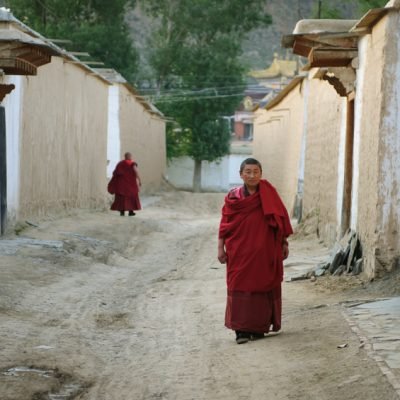