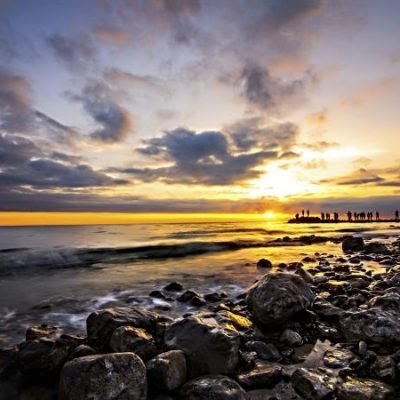 If you are looking for an epic adventure on the roof of the world in Tibet, you have found it in this 6 night / 7 day adventure where we cycle 360km around Qinghai Lake!  Cycle for 4.5 days around the pristine waters of China’s largest lake, with an average altitude of 3,2000 meters.  Qinghai Province is little known to tourists, and its China’s 4th largest province with a relatively small population of 5.5 million people. This is open, wild country that makes for a perfect bike trip surrounded by colorful nomadic culture.

Qinghai Lake is China’s largest salt lake located just 2.5 hours west of Xining, the capital of Qinghai Province. The lake is famous for its high altitude at 3,250 meters and it’s authentic Tibetan nomadic culture. The lake is also famous as a bird migration site for many species of birds stopping over on their way north to nesting and mating sites.

But the lake is also well known for the world’s 4th most famous professional cycling race, called the “Tour of Qinghai Lake”, held every year in July (surpassed only by the Tour de France, Giro d’Italia, and Vuelta a Espana in the road race world). Inaugurated in 2002, the Tour of Qinghai Lake is becoming one of Asia’s top cycling races with prize money of more than $1 million USD. Given the fact that the competition route reaches a height up to 3,800 meters at times, far higher than any of the European tours, it is also called the “Race in the Sky”.

But you don’t have to be an expert riding on a fancy custom $10,000 USD bicycle to cycle around the shining turquoise waters of one of Tibet’s holiest lakes! We have designed a special tour that takes the 360km journey around Qinghai Lake and allows you to fully experience the culture and foods that make this place so magical.

This tour runs at relaxed pace, allowing 4.5 days to fully enjoy not just the cycling journey but also the mountains and monasteries and nomads  around the lake.  We give you plenty of time to take your tour slowly and adjust to the high altitude because we believe biking is so much more than just riding with tunnel vision on a paved road. Cycling is ultimately a way to feel the wind, taste the salt of the lake, and be in intimate contact with the land and its native people. On this tour you will sleep in a nomad tent, taste freshly made yak yoghurt, and look out from remote Buddhist monasteries on the incredible sunset that glistens across the 120km long span of the lake.

We will provide all the bikes, gear, transportation, food, and accommodation so you don’t have to lug your bicycle around the world!  All you have to do is show up in Xining, the capital of Qinghai Province, and we will take care of the rest!

Watch the cycling tour around Qinghai Lake (and learn about the revolutionary foldable bikes that Dahon is making) here in this video:

Arrive in Xining XNN airport before 12 noon, our group leaders will pick you up in the airport just after baggage claim in a group shuttle.

3:00pm- Stop at Tangbo Monastery to learn about the history of Princess Wensheng and her journey to Tibet

5:00pm- Arrive at Tibetan homestay on the east side of the lake, learn about nomadic life and culture

6:00pm - Authentic Tibetan dinner and enjoy watching the waves of the shore as you relax and take in the sound of the lake

8:00pm - Sleep near the shores of Qinghai Lake

8:30am- Safety briefing and fit bicycles

3:30pm- Arrive Jiangxigou, have small snack and continue to ride another 17km

5:00pm- Arrive Tibetan homestay on the southwest shore of the lake, pitch camping tents right on the lake shore and enjoy a spectacular sunset from this nomad camp

7:30pm- Relax and enjoy the stars above the lake, sleep in camping tents by the lake

12:30pm- Arrive Heimahe town on southwest corner of the lake, lunch in a local restaurant

1:30pm- Ride 23km from Heimahe to beautiful guesthouse with open glass windows that look out on the west lake shore

3:30pm- Arrive guesthouse.  Settle in and enjoy a nice coffee shop in the guesthouse that overlooks the lake shore.  Possible 2 hour hike in the afternoon into the high grasslands to see yaks and sheep. Learn about nomadic culture and how Tibetans have lived for hundreds of years in simple sustainable harmony with the land.

7:30pm- Watch an incredible sunset over the lake. Rest and sleep in cozy guesthouse.

8:00am- Breakfast at guesthouse

10:00am- Arrive at a small monastery just before Shihaihe town that sits on a peninsula overlooking the lake.  Take a short hike around the monastery and view the lake from an incredible viewpoint filled with Tibetan prayer flags and Lhabtse. Great photo opportunities here with epic views!

11:30am- Depart Shihaihe to ride 13km for Niaodao (Bird Island).  This is the bird migration for 1000's of birds making their annual flight over Central Asia.

12:30pm- Lunch at a Muslim restaurant in Niaodao (Bird Island)

6:30pm- Arrive in Gangca on north edge of the middle of the lake.  Check into hotel and shower and rest.

8:30pm- Relax and enjoy the nice beds and cozy sheets in a hotel in Gangca

8:00am- Breakfast at hotel in Gangca

11:45am- Depart Haergai to ride to 15km to small Tibetan restaurant at the intersection on the road

2:00pm- Ride 15km off the road on a dirt path to our Tibetan homestay

3:30pm- Arrive at nomad camp in the high grass lands on the northeast shore of the lake. Spend the afternoon in a local hot springs and soaking those tired muscles.

7:30pm- Restful sleep in the homestay set in the open pastures near Qinghai Lake

9:30am- Ride 65 km through the desert sand dunes of the eastern shore of Qinghai Lake as we descend back to our starting point and finish the full 360km circle of Qinghai Lake

1:30pm-  Arrive back at our starting point, each a hearty lunch with our nomadic hosts

5:30pm- Arrive at hotel in Xining and take a much deserved hot shower

6:00pm- Closing dinner and final celebration as we look back on the memories from our cycling trip

Morning- depart hotel in Xining and join group shuttle to be dropped off at the Xining XNN airport or the Xining train station. 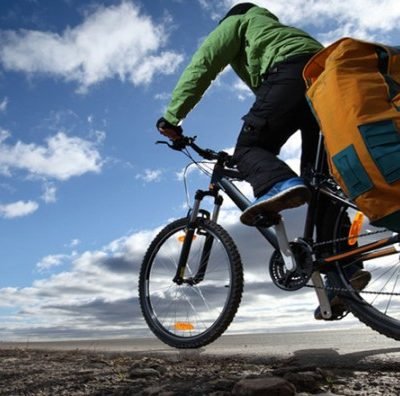 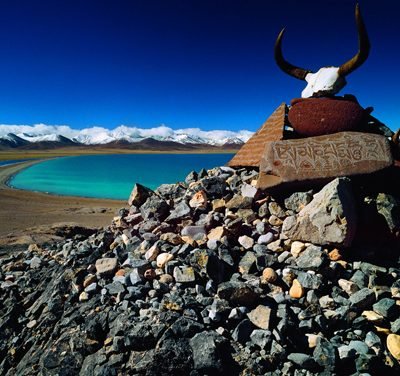 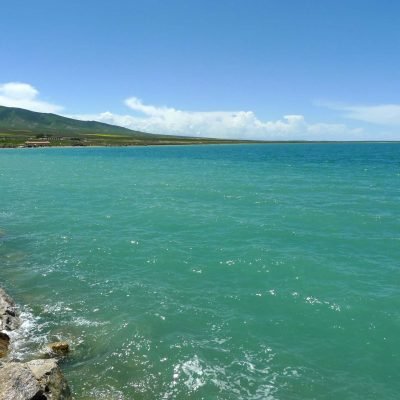 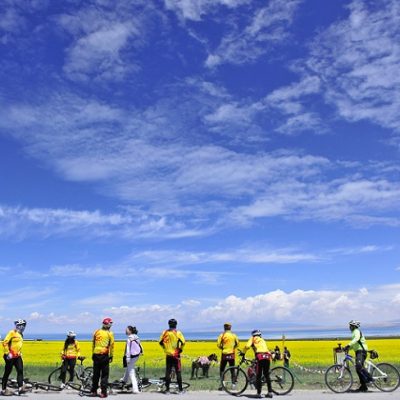 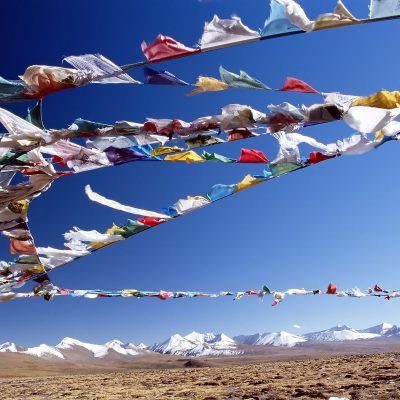 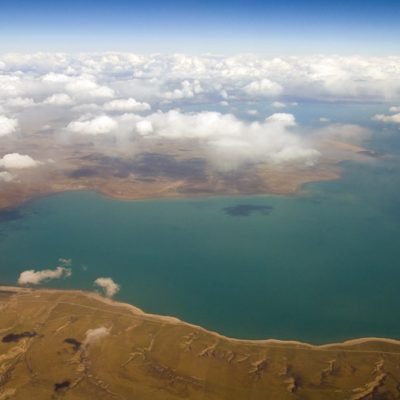 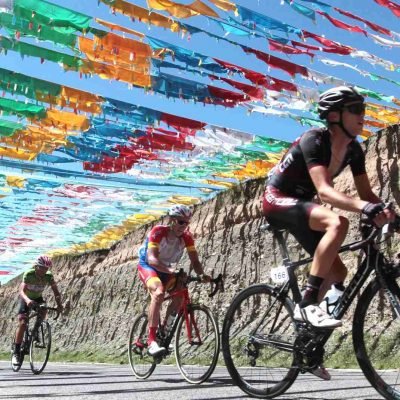 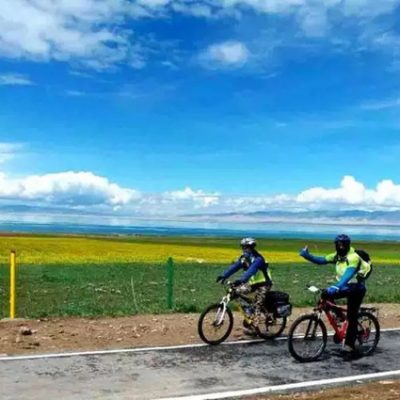 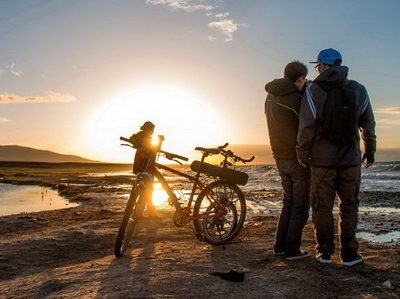 We usually require a 20% deposit upfront and then 80% balance sometime before the trip begins.