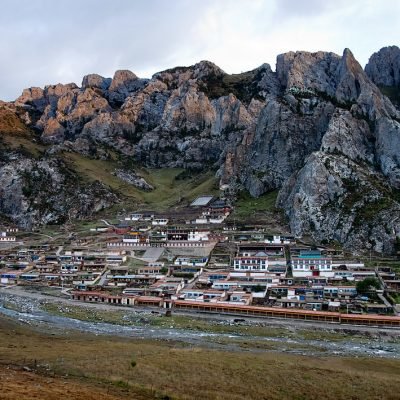 Located just 5 hours south of Xining, Xinghai 兴海 is a small Tibetan town south of Qinghai Lake. Xinghai is located in Hainan Tibetan Autonomous Prefecture, an area that is in the northeastern part of Qinghai Province and is just south of the Tibetan town of Chapcha (Gonghe 共和 in Chinese).There is now a new highway (G214) running from Xining 西宁 to Yushu 玉树 (through Gonghe) and this once 15-25 hour grueling drive is now getting more accessible and is only 11 hours. This is truly a stunning overland drive through very high, extreme grasslands and pure nomad culture. Since the April 2010 earthquake, Yushu has been rebuilt with beautiful infrastructure that supports tourism with a modern but distinctly Tibetan flair. The newly reconstructed Yushu offers to be an excellent base for adventures in hiking and exploring the variety of monasteries and religious activity in Kham Tibet.

Along the epic highway from Xining to Yushu there are truly only a handful of towns to stop in along the drive through the wide open, expansive grasslands. Think of this something like driving through Montana or even the parts of Nevada that are not Las Vegas (except there are no people here that are paranoid about alien invasions;). Long, lonely, arrow-straight sections of highway running blissfully forever into an open blue sky. You may even have the whole highway to yourself without seeing any cars for extended periods of time. This is country driving and road tripping at its best.

Among the few towns with hotels are Maduo 玛多, Golok’s highest town at 4300m (14,104 feet), and Huashixia 花石峡, a high truck stop town at 4050m (13,284 feet). Given the remoteness of these areas along the way to Yushu (and their respective elevations), it is advised to take the drive slow and acclimate over a few days. And Xinghai is a perfect middle point to do that.

In fact, if I were driving to Yushu I would acclimatize like this:

From Yushu there are at least 3 good days of interesting activities, including the largest Mani Stone pile in the world and a mountain entirely covered with prayer flags at the Princess Wencheng Temple. So it’s well worth the trip into Yushu.

Okay. So you know Xinghai is a nice place to stop between Xining and Yushu. But what exactly can you do there?

The town itself is pretty ordinary with a mix of Sichuan dishes, Muslim noodle shops, and vendors selling fresh Tibetan Yoghurt. The real highlight here is Serdzong Monastery, and especially the holy kora around the monastery. This is about 35 km outside of Xinghai town on a dirt road. There are signs in English pointing the way to the monastery just before you come to the town near the gas stations on the outskirts of town. This drive is exquisite. For the first 15km you drive along the grasslands typical of those all around the Xinghai vicinity. Then the road drops and winds into a river valley with a long bridge covered in prayer flags that spans the rushing river below. From the bottom of this canyon you can find lots of excellent picnic spots along the river and in the desert wash that spills down from the canyon walls. These are great places to cool off from the intense brightness of the open steppe. Then you ascend above the canyon walls through a gentle sloping valley that cuts right into the steep cliffs. From here you pass several nomad camps (many of which serve food and act as simple tent hotels in the warmer months of July and August). Then you come to the base of an incredible rocky cone-shaped mountain that sticks out of the surrounding plains quite prominently. Drive left around this mountain through some bumpy roads and you will find Serdzong Monastery tucked back under the dramatic rock face of granite. To get from Xinghai to Serdzong Monastery without your own car, you’ll have to charter a car to the monastery, though you can usually find pilgrims with whom you can share the cost of the ride (usually at least 100 元, often more). Take note: while the mountain and entire site are usually called Drakar Tredzong, the monastery (to which cars will take you) is called Serdzong. In just 20 km you have driven from sandstone desert scrub to alpine limestone towers to find a monastery housing some 350 monks.

Park in front of Serdzong Monastery. The monastery is interesting in its own right but most of the larger temple buildings have been newly built from concrete and lack some of the older character of other older monasteries. Nonetheless, the sparkling temple roofs as they shimmer and glint in the sun is quite stunning.

Follow the river in front of the monastery upstream about 400 meters and you will get to the edge of a newly built boardwalk that is the religious pilgrimage around the monastery perimeter. This board walk is 7.4 km in total length as it circles the ledges and cliffs around Serdzong Monastery. The boardwalk starts at the edge of a monastery near a large stupa and gradually moves up the grasslands with great views of the Tibetan tents nearby. You could walk this boardwalk in about 3 hours total – and you will probably encounter some Tibetan pilgrims along the way as you do.

Crossing two 4000-meter passes, this is not the easiest of day hikes (make sure you’re acclimatized), but it is certainly rewarding. Spectacular views of the Xinghai grasslands and beyond open up at this point where you cross a ridge full of prayer flags. Descending from the ridgeline, you’ll then contour around a beautiful grassy valley, its smooth slopes cut at their center by a dark and precipitous gorge. In the warmer months, this valley is a popular place for nomads to set up camp, graze their yaks and pick valuable caterpillar fungus. [NOTE: If you approach a nomad tent, make sure you do so with rock in hand; their fierce and frightening dogs are usually untied and will not hesitate to attack].

Continue to contour around the impressive limestone cliffs of Drakar Tredzong. Interesting rock formations, including several natural archways, are visible on the mountain above. Eventually, the valley narrows to the point where the cliffs of the canyon below merge with those stretching upwards to the sacred peak, and the path is pinched onto a narrow ledge between the cliffs. Soon, though, the deep canyon veers away and the landscape opens up into the vast grasslands that stretch past Xinghai to the distant Yellow River. After continuing to wrap around the base of Drakar Tredzong, you finally begin to ascend the second pass of the circuit up the winding boardwalk steps. A short way above the base of the ascent, a side path leads through a natural archway and some spectacular miniature slot canyons into a secret cliff lined amphitheater with meditation caves and hermitages – some still in use. Returning to the main path, continue your ascent to the pass, where you will see the monastery, sitting in the bottom of its peaceful valley, below – the end of the circuit. Here you can enter the monastery through the “back gate” and continue your exploration throughout its alleys and large teaching halls.

The village below the monastery has several simple restaurants but no obvious place to stay; unless you have a tent, you’ll probably want to return to Xinghai town to find a hotel for the night.

The town of Xinghai has a handful of hotels. Most of these are not able to host foreigners, but the Xinghai New Century Hotel, a decent, clean hotel near the downtown gas station with standard double rooms at 198 RMB, is one (if not the only) hotel that can legally host foreigners as of mid-August 2017. There are other hotels in Xinghai that are working on getting their license to host foreigners from the local police, however these newer, fancier hotels will likely not have this special license until November 2017. The all glass front “WangFu Da Jiu Dian” is among some of the swankier hotels that will have such a license hopefully into winter 2017. 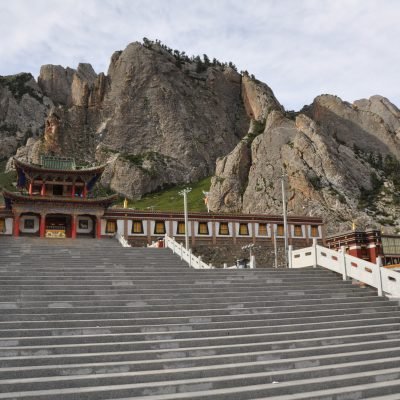 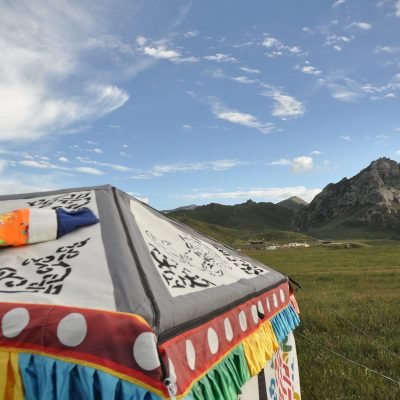 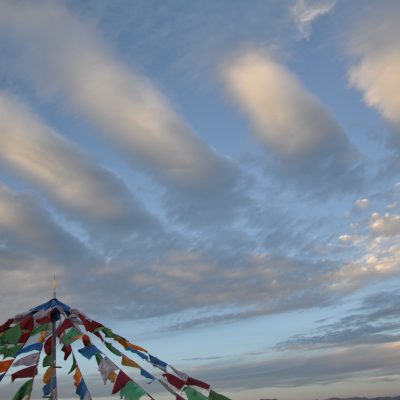 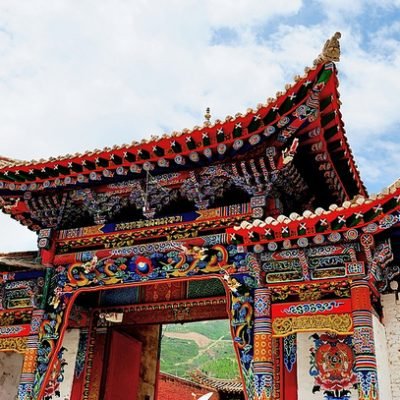 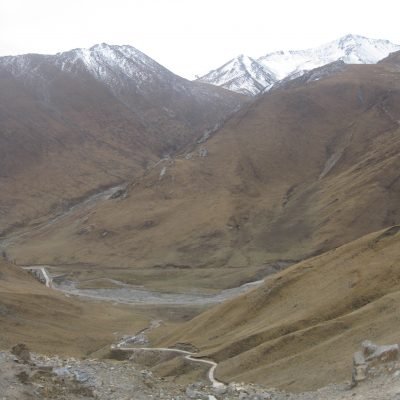 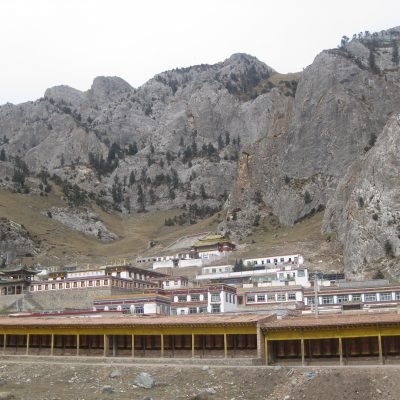 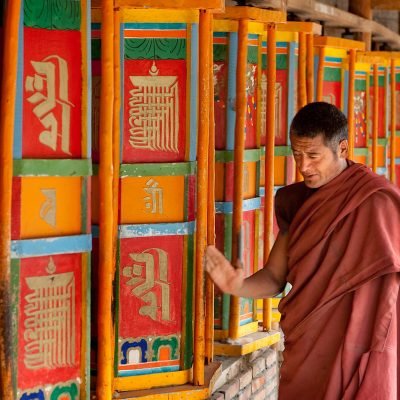