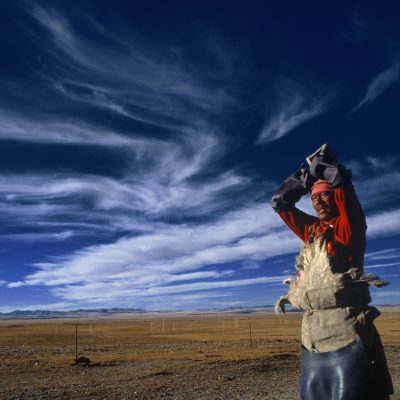 Every Tibetan dreams of making a sacred pilgrimage to Lhasa at least once in their lives and you should make it a point to see Tibet’s holiest inner sanctuary as well.  Make the best of your time in Tibet’s holiest city and explore the best Tibet has to offer.  Traveling to and from Lhasa is not cheap so you really want to get a good value for your time, money, and effort.  Here are our top 5 things to do in and around Lhasa, Tibet.

The Potala Palace, Originally built by King Songtsen Gampo in the seventh century, is located on the Red Hill of Lhasa. The awe-inspiring Potala Palace, perched high above much of Lhasa, is the landmark of the city.

The Potala Palace (on the north side of Lhasa, Tibet) is the massive fortress-like building that is often depicted in the classic photographs of Lhasa. With over 1000 rooms and at 14 stories tall this is considered the essential building of Tibetan architecture. The palace is a massive white and brownish-red structure that casts an imposing shadow over the rest of the Lhasa and is held sacred in many Tibetan paintings, weavings, and sculptures in homes, monasteries, and restaurants all across the Tibetan Plateau.

Jokhang Temple is the most sacred and important temple for most Tibetans in Tibet. This is the Mecca of Tibet.  Along with the Potala Palace, it is probably the most popular tourist attraction in Lhasa. It is part of the UNESCO World Heritage Site titled the ‘Historic Ensemble of the Potala Palace’.
The  temple is named for it’s holiest and oldest statue of the original Buddha called the Jowo Rinpoche (or Jowo Shayamuni).  This is a life-sized (5 foot/1.5m) statue of the Buddha when he was 12 years old and is the centerpiece and treasure of Jokhang Temple and in all of Tibet. It is said that the Jowo Rinpoche was made in India during the lifetime of the original Buddha and later was given to China as a gift. When King Songtsan Gampo married Chinese Princess Wenchen during the Tang Dynasty, the Jowo Rinpoche, along with a great deal of Tibetan religious, was given as a dowry in this political marriage in 641 AD. Many pilgrims prostrate for 1000’s of kilometers from all corners of the Tibetan Plateau just to set their eyes for a few moments on the sacred Jowo Rinpoche. These pilgrims all believe that just one devoted prayer at this most holy site will bring a lifetime of health and blessing to them and their families.

Barkhor Street, a circular street at the center of Lhasa, is the oldest street in a very traditional city of Tibet. It is the road that pilgrims tramped out around Jokhang Temple through centuries. When walking along Barkhor Street, you should move in the clockwise direction.
Barkhor Street used to be a single street around Jokhang Temple, and is called the “Holy Way” by Tibetans. Now its area expands to an square area that takes about 30 minutes that circles the Jokhang Temple. Consisting of the South Street, West Street, North Street and the East Street, Barkhor Street is a square circuit with a perimeter of about 1000meters and 35 adjacent alleys. There is easily enough to see and do here for a whole afternoon as this is the heart of pilgrimage to Tibet and you will see 1000’s of beautiful faces and traditional Tibetan dress here.
The street is paved with hand-polished stones, and the architecture on the streets -from grocery stores to old-style hotels –  maintains a historic Tibetan style (unlike the rest of Lhasa which has developed into a modern Chinese city). On the 4 corners of the square, altars offer burnt incense, juniper, and barley as offerings to the spirit world that is alive and active in this mystical place. On both sides of the street, there are more than 120 handicraft shops and over 200 stalls with over 8000 kinds of souvenirs including copper Buddhas, hand prayer wheels, butter lamps, hand woven carpets, Tibetan barley wine, dried yak meat, Tibetan thangkas and every possible color of the rainbow.  This is a place that delights the senses with extraordinary sights and smells.

Sera Monastery, is the last of the three principal Yellow Sect monasteries built in Lhasa. Every day, hundreds of red-robed monks assemble in small groups and practice their debating skills. Though most Gelugpa Monasteries still practice Buddhist debates this is one of the few monasteries where foreigners are allowed into the debate to watch and photograph this epic battle of wits and logic.
Note that smartphone cameras are allowed in the debates but larger digital cameras are not allowed in the open square for sake of the monk’s privacy.

Drepung Monastery is considered one of the three great monasteries inTibet. Drepung is the largest of all Tibetan monasteries, and indeed at its peak was the largest monastery of any religion in the world.
For more information on travel in Tibet contact us here.