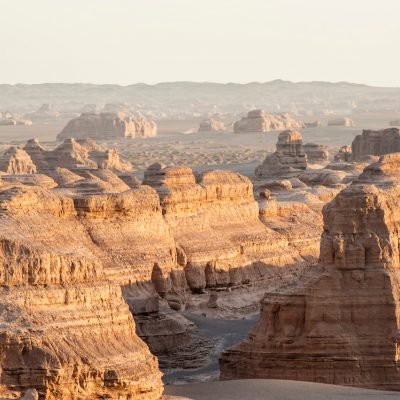 Located about 180-kilometer northwest of Dunhuang City, Yadan National Geological Park sits right on the edge of the Gobi Desert and occupies an area of about 398 square kilometers and has the largest landforms of its kind in all of western China. This park also has the nickname, “Devil City”  because the wind howls here eerily through the open desert like the scream of a devil.

In 2006, the Chinese Tourist Administration listed Yadan National Park as a class 4A level scenic area and then it also became a base for scientific research, education, and geological study. Many Chinese war movies have been filmed here because of its remote location and unique desert formations. Here the the vast expanses of Gobi Desert meet with stunning red rock scenery in a haunting and breathtaking landscape that feels more like something from Mars than it does something from Earth.

The park takes its name from it’s geological formations with the scientific name “Yardang”.  This is a Chinese transliteration of that word and thus the Chinese characters, “Yadan”.  Stretching 25km from north to south, the Yadan National Geological Park offers various landforms that take on distinct shapes, many of which mimic animals when viewed at the right angle. Some of these particular shapes include a Stone Bird, a Sphinx, a Golden Lion, and a Peacock. And if you use your imagination, you can even picture some famous structures like the Potala Palace in Tibet, the Heaven Temple in Beijing, and other famous pagodas and temples.

Because of the remoteness of the park, the cell phone signal here is very poor and the government actually requires that tourists join a park bus tour in order to make sure visitors do not get lost in this vast park.

There are four main stops in the park and the public park tour bus will take you to each one.  As you stop at these points of interest, make sure you pay attention to the tourists in your group and do not stray too far as you will have fixed time at each stop before your designated tour bus continues on to the next stop.

When the tour bus stops at the first place, you might be tempted to think you have just landed on Mars because of the barren red rocks. The most remarkable formation here is the Golden Lion which is a product of Yadan’s long history of erosion. Through the force of water, winds, and geologic collapse, the rocks here have been eroded and then have decayed and fragmented gradually into smaller pieces. Overtime the erosion peeled away the looser and softer portions of rock until the outline of a Lion’s head can be seen in the rock

The Sphinx is the second attraction you will stop at in the park. Seeing it from a distance, this long, flat formation resembles a crouching lion with a face of a human being. This formation, like the Golden Lion before it, is a long, flat wall that has been carved out by weather and time.  The Sphinx is composed of sandy and argillaceous debris and it is this loose rock which has been chipped away over time to give it is peculiar Egyptian-like shape. Ironically, as a geologic structure it is a bit of a transitional form between the first stop at the Golden Lion and the third stop at the taller, column-like Peacock.

This rounded columnar yardang formation is the third stop on the tour and is probably the most elaborate of all the formations. The shape, as you might guess,  looks like a peacock strutting its stuff as it is proudly fanning its tail open to attract a mate.

This is the last attraction on the tour. The structure here is comprised of several layers of striated rock that truly looks like a fleet of ships floating in the boundless desert. This is a very impressive structure and really carries a certain regal nature, just like the command of a real fleet of ships.

If  you happen to be hiring a car or a van, it is worth a side trip from Yadan National Park to see some of the old watch towers of the western most Great Wall.  Here are some of the highlights you might want to stop at on the way back to Dunhuang:

The Han Great Wall was built as a defense against the invasion of Xiongnu during the West Han Dynasty. Unlike it’s eastern cousin in Beijing, this section of the Great Wall was built using much different materials than the wide stone sections you may have seen in Mutianyu or Badaling.  Due to the harshness of the environment and the lack of building materials available in the desert, the Han Great Wall was made from branches, reeds, sandy gravel and other local materials instead of masonry. There was a beacon tower exactly every 5 km to convey news and military information along the entire length of the ancient Great Wall. Today, this grand formation has been highly eroded and has lost much of its once exquisite detail after several millennia of exposure to the elements. But, with a little imagination, you might be able to picture what is was like back in the days of great Emperors.

Yumen Pass was a primitive military post and part of a string of beacon towers that extended to the garrison town of Loulan in Xinjiang. Jade was imported from the Central Plains of modern day Xinjiang through this pass, so it was named Yumen Pass which means the “Jade Gate Pass”. Although it is not much to look at these days, in ancient times, Yumen Pass must have been a spectacular site filled with the noise and opulence of journeys of 1000’s of wealthy envoys and camel caravans. Yumen Pass is today a lonely square castle standing in the sandy rocks of the Gobi Desert. If you climb up to the tower for a view you will see a long line of scattered mashes, twisting ravines, and sections of the winding Great Wall dotted with tall and straight poplar trees.

Getting to Yadan National Park- For Independent Travelers

Most tourists hire a private car or van to take them on a day trip to Yadan National Park.  But if you are looking to save money, it is possible to catch a public bus from Dunhuang as well. From the eastern gate of the main Shazhou Night Market in Dunhuang, you can take a long-distance bus to Yadan National Geologic Park. Two buses run each day and these buses are likely to stop operation in the winter and the low season.  So if you are traveling between November and April you may need to hire a car to take  you to Yadan National Park. 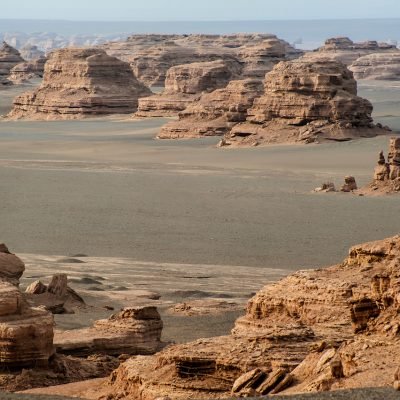