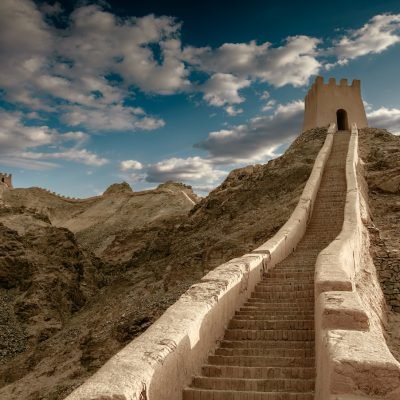 Jiayuguan Pass is an iconic image of western China. Sandwiched between the snowy 6,000 meter Qilian Mountain peaks and the Black Mountains of the Mazong Shan Range, this fort sits in a truly strategic military location. Built in 1372, this fortress was the last major stronghold of imperial China – the end of their ‘civilised world’, beyond which lay a harsh and haunted desert and the barbarian armies of Central Asia.

Why Was the Jiayuguan Pass So Important?

Jiayuguan Pass used to be the starting point of the ancient Great Wall built during the rule of the Ming Dynasty (1368– 1644). It was the most important military defensive project in north western China because it guarded the narrowest point of the western section of the Hexi Corridor in a narrow corridor of otherwise impassible mountains. This was  the vital defensive frontier fortress that had sealed China off from invaders since the Han Dynasty (BC 202—220). After the Jiayuguan Pass was constructed, the army of  the Ming Dynasty used it to protect inner China from the invasion of nomadic groups. At the same time, the Jiayuguan Pass also played a key waypoint on the ancient Silk Road. Foreign travelers and traders came from Europe, Middle Asia, and entered into China from this gateway. While the commodities of China were also exported to Central Asia and Europe from this pass. Along with the foreign trade, a cultural exchange of religion, art and custom also flourished. It was this trade of ideas that has not only forever changed the western world but also China itself.

The History of Jiayuguan Pass

During the early period after the Ming Dynasty was established, barbarian armies of the Yuan Empire and Turpan constantly invaded the Hexi Corridor area. The Chinese general Feng Sheng was consequently ordered to construct a defensive pass to protect China from invasion from both the Yuan and Turpan peoples. He chose the Jiayu Mountains as the final staging ground for his defensive strategy because, as time has shown, this pass has been extremely hard to penetrate but comparatively easy to defend.  The construction started in the year 1372, and the many troops completed the first stage of the work quickly.  The first stage of the Jiayuguan Pass consisted of several ramparts surrounded by some barracks. The subsequent construction took 168 years to complete and finally became the western starting point of the Great Wall of Ming Dynasty.

Even though the walls and towers have been  partially damaged by centuries of war and weather, the Jiayuguan Pass is still one of the most intact surviving ancient military buildings in China. Several restorations have been undertaken to protect the original design of its fort, towers and walls. But travelers can still see much of its original construction.

Jiayuguan Pass is an immense military complex which covers more than 33,529 square meters and consists of an inner city,  an outer city and an outer moat.

The inner city has the shape of a trapezoid with an imposing wall that is 11 meters high and 640 meters long. It was used as the third barrier in a series of walls and towers against incoming enemies. Two defensive gates, Rou Yuan Men and Guang Hua Men, were built in the western and eastern sides of the city. Towers for guards and commanders were built on the walls as lookouts into the vast desert beyond the city. The central area of the inner city housed the office of the commander and a Guanyu Memorial Temple. There are even bridleways for carrying horses up to to the city wall.

The outer city was the second barrier enemies would encounter. Unlike the inner wall which was built from loess, the outer city was made of exceptionally strong  bricks and this section of the wall was connected directly to the long stretches of Great Wall that scattered out from the outer city. A striking plaque was inserted on the wall above the gate.

A deep moat encircles the Jiayuguan Fort outside the outer city. Just 50 meters in front of this moat is a battlefield where 1000’s of men died in combat defending (or invading) China’s northwestern border.

Things to do at the Jiayuguan Fort

1.) Learn about history in the Great Wall Museum

Before entering the fortress, take a short visit to the Great Wall Museum to learn some interesting facts about both the Jiayuguan Fort and the Great Wall.  The museum contains some excellent historic photos and relics of this area.

Just in front of the back gate, you can find many locals offering chances to ride a camel or to just take photos with the camels. Don’t be afraid of the camels, they are very docile. Should you decide to go for a ride, a local camel guide will accompany you.

If you want to take a look at the Jiayuguan Pass from the Gobi desert  you can try the exciting four-wheel drive ATV’s. These four wheelers offer a chance to get away from the crowds and see the desert in a purer form.

Nearby Places to Visit

The entrance ticket for Jiayuguan Pass costs 120 RMB/person, and this price also includes the admission fees for visiting the Overhanging Great Wall and the First Mound of the Great Wall. But these 3 locations are not very close to each other.  So make sure you leave extra time to get out to these destinations as well.

The Overhanging Great Wall, also known as the Xuanbi Great Wall. It is 8 kilometers away from the Jiayuguan Pass Fort and 14 kilometers from the city. In ancient times, it was a part of the Jiayuguan Pass, and was connected with the fort. More than 460 years later, most sections of the walls have disappeared. The remaining section is 750 meters long, rising up 150 meters and hanging on a cliff face. Unlike the sections of Great Wall near Beijing, these sections were constructed with loess because of the lack of water in this area. Hiking up the Great Wall here takes only about a half an hour.

The First Mound of the Great Wall 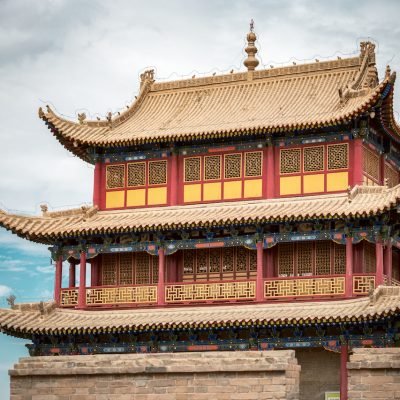