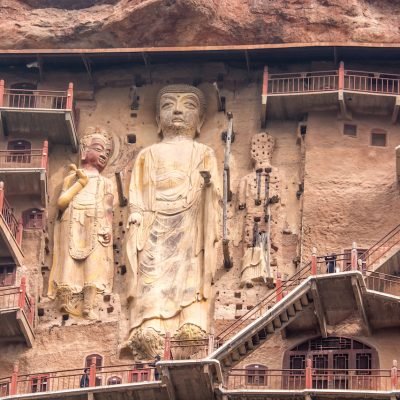 With a backdrop of the lush, green mountains just southeast of Tianshui town, the grottoes of Maiji Shan contain some of the most famous Buddhist rock carvings along the Silk Road. The steep cliff faces of Maiji Shan are scattered with 194 caves holding more than 7,800 sculptures carved principally during the Northern Wei and Zhou dynasties (AD 386–581). If you dare to ascend to the higher grottoes, you will need to cross a series of wooden planks and steps that ascend the outside of the cliff face to the top of a Buddha carved in the rock.

The Maijishan Grottoes (simplified Chinese: 麦积山; pinyin: Màijīshān Shíkū) are a series of 194 caves cut in the side of the hill of Maiji Shan in Tianshui, Gansu Province, northwest China.

This example of dramatic architecture contains over 7,800 Buddhist sculptures and over 1,000 square meters of murals. Construction began in the Later Qin era (384–417 CE).

The grottoes were first properly explored in 1952–53 by a team of Chinese archeologists from Beijing, who invented the scientific numbering system still in use today. Caves #1–50 are on the western cliff face; caves #51–191 on the eastern cliff face. These caves were later photographed by Michael Sullivan and Dominique Darbois, who subsequently published the primary English-language work on the caves noted in the footnotes below.

The name Maijishan consists of three Chinese words (麦积山) that literally translate as “Wheatstack Mountain”.  But because the term “mai” (麦) is the generic term in Chinese used for most grains, one also sees such translations as “Corn Mound Mountain”. Mai means “grain”. Ji (积) means “stack” or “mound”. Shan (山) means “mountain”.

The mountain is formed from purplish red sandstone and the grottoes here are just one of many cave grottoes found throughout northwest China, lying more or less on the main trade routes connecting China and Central Asia.

Maijishan is located close to the east-west route that connects Xi’an with Lanzhou and eventually Dunhuang, as well as the route that veers off to the south that connects Xi’an with Chengdu in Sichuan and regions as far south as India. At this crossroads, several of the sculptures in Maijishan from around the 6th century appear to have Indian—and SE Asian—features that could have come north via these north-south routes. The earliest artistic influence came, however, from the northwest, through Central Asia along the Silk Road. Later, during the Song and Ming Dynasties, as the caves were renovated and repaired, the influences came from central and eastern China and the sculpture is more distinctly Chinese.

Cave shrines in China probably served two purposes: originally, before Buddhism came to China, they may have been used as local shrines to worship one’s ancestors or various nature deities. With the coming of Buddhism to China, however, influenced by the long tradition of cave shrines from India (such as Ajanta) and Central Asia (primarily Afghanistan), they became part of China’s religious architecture.

Buddhism in this part of China spread through the support of the Northern Liang, which was the last of the “Sixteen Kingdoms” that existed from 304–439 CE—a collection of numerous short-lived sovereign states in China. The Northern Liang was founded by Xiongnu “barbarians”. It was during their rule that cave shrines first appeared in Gansu, the two most famous sites being Tiantishan (“Celestial Ladder Mountain”) south of their capital at Yongcheng, and Wenshushan (“Manjusri’s Mountain” ), halfway between Yongcheng and Dunhuang. Maijishan was most likely started during this wave of religious enthusiasm.

An English-speaking guide charges ¥50 for up to a group of five. It may be possible to view normally closed caves (such as cave 133) for an extra fee of ¥500 per group.

The regular admission ticket includes entry to Ruìyìng Monastery (瑞应寺; Ruìyìng Sì), at the base of the mountain, which acts as a small museum of selected statues. Across from the monastery is the start of a trail to a botanic garden (植物园; zhíwùyuán), which allows for a short cut back to the entrance gate through the forest. If you don’t want to walk the 2km up the road from the ticket office to the cliff, ask for tickets for the sightseeing trolley (观光车; guānguāng chē; ¥15) when buying your entrance ticket.

You can also climb Xiāngjí Shān (香积山). For the trailhead, head back towards the visitor centre where the sightseeing bus drops you off and look for a sign down a side road to the left.

Sometime between 420 and 422 CE, a monk by the name of Tanhung arrived at Maijishan and proceeded to build a small monastic community. One of the legends is that he had previously been living in Chang’an but had fled to Maijishan when the city was invaded by the Sung army. Within a few years he was joined by another senior monk, Xuangao, who brought 100 followers to the mountain. Both are recorded in a book entitled Memoirs of Eminent Monks; eventually their community grew to 300 members. Xuangao later moved to the court of the local king where he remained until its conquest by the Northern Wei, when he, together with all the other inhabitants of the court, were forced to migrate and settle in the Wei capital. He died in 444 during a period of Buddhist persecution. Tanhung also left Maijishan during this period and travelled south, to somewhere in Cochin China, when in approximately 455, he burned himself to death.

How the original community was organized or looked, we don’t know. “Nor is there any evidence to show whether the settlement they founded was destroyed and its members scattered in the suppression of 444 and the ensuring years, or whether it was saved by its remoteness to become a heaven of refuse, as was to happen on several later occasions in the history of Maijishan”.

The Northern Wei were good to Maijishan and the grottoes existence close to the Wei capital city of Luoyang and the main road west brought the site recognition and, most likely, support. The earliest dated inscription is from 502, and records the excavation of what is now identified as Cave 115. Other inscriptions record the continued expansion of the grottoes, as works were dedicated by those with the financial means to do so.